About the Author Matjaz Chvatal:

A few years ago he made his childhood dreams come true. After he built his own wooden house somewhere in beautiful Slovenian Alps, he started building his own sailing catamaran. He named it Ariki, which in Polynesian means a chieftain. Himself and his crew get enough opportunity to enjoy themselves.
Continue reading ...

Awaiting for the calmness 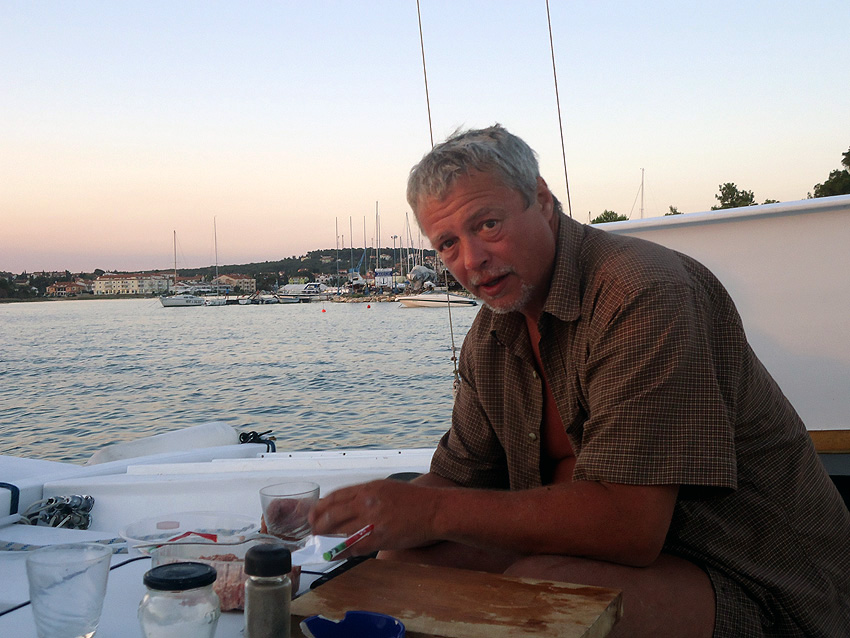 Awaiting for the calmness – This one article about me was published in the biggest Slovenian newspaper DELO. Written by jurnalist Urska Kriselj GRUBAR. Here she wrote:

Awaiting for the calmness – He’s leaving me hungry in all the questions I raise. I try to knit a story out of his I-do-not-knows, maybes and other might-bes. I’m trying to voice it out loud. My selection of words to define who he is, he does not find agreeable. He prefers to descent into an argument with me than be labeled and placed in a box. Even through our joint effort we cannot find the words to define him. Who is he? Why is he so different? Questions remain unanswered. “I don’t think about myself in that way.”

Our interview is much longer that what I’m used to, but still I’m not able to arrive at the conclusion. I cannot find what I’m looking for, so I stop searching. I turn off the microphone, forget about the interview questions and I let myself be taken away. Despite all my good intentions, I’m swimming against the current.

He’s still jet-legged from his latest adventure, sailing at the exotic Indonesian sea. “I’d need a beer or two to loosen my tongue, but I suppose it’s a bit too early for that.” We settle for orange juice with water and continue with our conversation.

Over a month ago he joined his friend Slavc Sikonja at his sailing around the world adventure. It was one of the most turbulent and unpredictable months of all the forty five years of his life. Weather was not kind to them and many things didn’t go as planned. Which is not something you expect at sea anyway. They had to cut their journey short and returned home exhausted. With experience still fresh in his mind, I expect to get a true adventure delight from him. An unbelievable story, a crazy experience, a drop of wisdom or something special that us land people never get to experience.

“I will go back,” though, is more or less everything I should have been satisfied with.

But, of course, I’m not. I want to know at least one good reason, why he would want to go back. Might be because of how the recent experience makes him feel about right now? Obviously, all the danger he was in during the journey, did not allow him to think about the simple everyday problems, only how he was going to survive in the moment. But it wasn’t that. It wasn’t adrenaline either, or experience, or the spirit of the adventure, bragging to the neighbors or any other kind of getting attention. None of that. What is it then? Not long ago he wrote to me from his trip.

“Sailing from Bali through Indonesia to Singapore was two weeks of hell in the world. We sailed through at least fifty storms. Winds were against us. We had to sail against currents most of the time. There were radar undetectable fish-boats everywhere, of whom many were pirates, but that was not even the worst. The most dangerous are shallow waters and numerous rocks. Oh, and let me not forget about how unbelievably many underwater volcanoes there are. If the gas pocket erupts at the moment when you’re over it, the boat simply disappears. There’s nowhere to hide and nowhere to wait it out.”

I think he’s brave, but he disagrees.

“Brave are the parents with a sailboat called Abrakadabra, with two small children on board and an American flag sailing in hostile waters. Brave are the grandparents sailing with their grandchild. A perfect opportunity to create harmony. They are brave.”

So what should I conclude from this? That only those who risk it together are brave and the ones doing it alone are not? For achieving family’s harmony, and no doubt long before that to achieve harmony within oneself, it takes courage. Be it on the land or at the sea.

It’s a fact that Matjaz has a restless spirit. We realize it has been like that for a very long time. As a pupil he was transferred five times. He ended up in juvenile correctional home in Jarše.

He finished the first three years of school with exemplary success.

Then his family moved to the other side of the city and he was forced into a new environment with children he didn’t know. He never felt like he belonged there. His school grades were dropping at the same time as his intelligence tests, he was forced to take regularly, were way above average. Something didn’t add up and it seems like it stayed like that until today. He became a rebel, although he claims he didn’t.

I suppose that’s the reason he doesn’t judge anyone, especially his free-spirited parents. I understand him now. Years ago, he read an article about indigo children, bright minds with unconventional psychological attributes (especially for those times). He found himself in them. “As if I was reading about myself.” Since then he’s especially careful with his own parenting. “My wife and I agree that the most we can give our children is for them to become independent. We don’t force our dreams and wishes upon them. We allow them to make up their own mind and become what they want to become. I will only oppose them if they want to become a police officer or military. I will resist it with all I’ve got.”

Matjaz is allergic to the cops and all those uniformed bureaucrats.

They raise his temper and make him restless. There are nights when he’s unable to sleep peacefully because of them. He was chased by IRS for 11 years, supposedly he evaded paying taxes, which was not true. “A blue envelope was waiting for me when I got back from sailing in Indonesia. It said I have to pay 80 EUR for a VHF frequency on the catamaran, but I wasn’t even using it and I never will. Before my departure they told me it costs 20 EUR, but they send me an invoice four times higher.”

Instead of paying, like every law-obedient Slovenian citizen would, I will probably write a salacious letter instead. “At least that.!” He’s fed up with constant new regulations, restrictions and inhibitions that prevent a decent human being from spreading their wings and flying. He’s ashamed of being a citizen of Slovenia, he’s ashamed of people leading the country, but at the same time he’s in love with the country itself. He likes to come back home. “When I describe my country to my fellow travelers, they always say that my country must be heaven on earth, they’re always amazed by my enthusiasm when I speak of it.”

In the same way or even more vividly he designs his tourist guides, which sell in huge editions. Hundreds of thousand editions sold is an indication that the author knows his business. But for him writing, publishing and everything that goes with it is just means that help him live his dreams, to spend months a year at sea. To be homeless is the peak of career for him. He will probably not life to see the day, but he will revisit the sea again and again to move out of bureaucrats’ way. “There a more and more of us like-minded people at sea every day.”

A few years ago he made his childhood dreams come true. After he single-handedly built his own wooden house somewhere in beautiful Slovenian Alps, he started building his own catamaran. He named it Ariki, which in Polynesian means a chieftain. Himself and his crew get enough opportunity to enjoy themselves. He loves the calmness at the sea. I don’t ask him any more, but I assume this is the peaceful state he’s been looking for all his life.

Matjaz would not agree. He says, who searches, will not find it. Despite all the facts I’m convinced, he’s not one to sit and wait for things to happen. He is aware that it could happen, or it couldn’t. All we’re left to do with is wait for it patiently.

Become a member of our great crew.